Together, exploring radical hospitality in grounded translocal experiments around the globe

Kairos Exchanges are un/learning journeys that bring communities of alternative activism and postactivist practices together. They are about seeing with new eyes, creating emancipatory knowledges together, and stitching quilts of solidarity especially with groups in precarious circumstances. It is about fellowship, sharing and siblinghood. It is about listening-together-with. It is making-kin-with in a performance of mutual fragility and radical hospitality. They are an opportunity to braid our lives together and an exchange of gifts between parties, honouring an old cross-cultural tradition of receiving the traveller and being generous to one’s host. They offer fissures in our day-to-day lives for both traveler and host that call upon a mutual openness to change. It is cooking together, singing together, picking mushrooms together, eating together, and crying together. Kairos Exchanges give potential host an opportunity to see themselves through their hospitality, to notice their own lives, as if for the first time.

‘Kairos’ was the deity of opportunity in the old Greek pantheon and the youngest child of Zeus. Ancient Greek storytellers also used the word ‘kairos’ to describe the ‘opportune’ moment, a breakthrough instant, when a traditional border was queered and unsettled, and a strange relationship emerged.

The word ‘kairos’ emerged from the material practices of that civilization: for instance, when an archer’s arrow pierced its target, this was ‘kairos’. Or in speaking and statecraft, when the right words were said, that was ‘kairos’. Or in textile production, specifically weaving (which was a socially respected female-gendered labour activity), when an opening allowed for the crosshatching weft to intercept the warp in the emerging tapestry, philosophers saw this as ‘kairos’. ‘Kairos’ notices the divine in the transversality of the weft. The intersectionality of the ordinary. The nonlinearity of time. ‘Kairos’ undercuts ‘chronos’, quantitative time, dancing through it, without dismissing it. Queering it. Like eternity waltzing with temporality, neither of them transcendent nor separable.

In the concept of ‘kairos’ we find an ethical postactivist invitation to “make sanctuary”, to reweave ourselves with telluric kin, to develop new posthumanist sensibilities, to decenter the human figure, to break open the exclusivity and racism of clock time, to nurture our collective capacities to ask new questions, to frame new fields of expertise, to notice our collective fragility in terms of how we often respond to complicated dilemmas, and (especially resonant in these times of immigration sagas and walls) to find other ways of crossing borders.

“If you have come here to help me you are wasting your time, but if you have come because your liberation is bound up with mine, then let us work together.”

The Emergence Network organizes and hosts two to three Kairos Un/Learning Exchanges each year. Periodically, we extend an open call throughout our networks and beyond to invite folks already exploring what it means to live and practice post-activism (whether they use that language or not). As a community, we pay attention to resonant interests and practices that create the conditions for deep connection and powerful un/learning experiences for both the visiting and hosting groups, as well as for our wider communities. Using participatory methodologies, we co-design and host these exchanges in which a visiting group from one place in the world comes to live with and work alongside another community for several weeks at a time. Kairos, at its core, is an invitation to “make sanctuary,” to reweave ourselves with telluric kin, to decenter the human figure, to break open the exclusivity and racism of clock time, to nurture our collective capacities to ask new questions, to notice our collective fragility in terms of how we often respond to complicated dilemmas, and to find other ways of crossing divides. 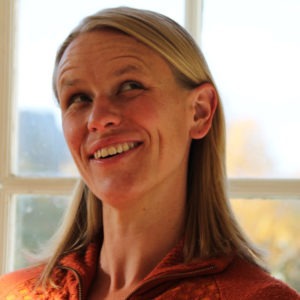 Aerin Dunford is a writer, upcycling artist, urban gardener and yoga instructor. She is an independent consultant at Coquixa Consultores using Art of Hosting and other participative approaches as a basis for her work with organizations and groups of all kinds. Aerin is the Chief Basketweaver at The Emergence Network, a translocal community of postactivists posing questions such as: what if the way we respond to the crisis is part of the crisis? Since the death and stillbirth of her son, Rafael, in 2018, Aerin has been called to work with grief in new ways; she has been reflecting, writing and convening others to metabolize loss together. 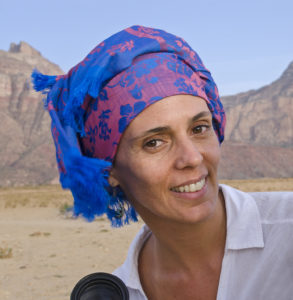 I was born in Brazil and I received two gifts early in life that shaped my existence: a very brave mother who broke through boundaries of her generation to become a medical doctor, and my godparents. While the dedicated Doctor would take care of people in need, my godparents spent many nights awake looking after me. My godfather was the best storyteller I have ever met. He had an amazing imagination and creativity and described fantastic occurrences, magical places and heroes. My godfather deeply influenced my curiosity about other cultures, adventures and journeys around the world. One of the reasons I became journalist was because of my godfather’s creativity, as well as my mom, with her sense of caring for others.

I dream about writing stories of inspiring people who take care of nature and animals, dedicating their lives to social justice. Weaving between NGOs and the main Brazilian newspapers and magazines, I've had the chance to work in the Amazon covering issues of deforestation and community empowerment. I have also spent time traveling in places such as India, Thailand, Bhutan, Namibia, Madagascar and Ethiopia. I was always searching for good, strong stories. I am always fascinated by meeting and interviewing amazing people around the world.

One of the themes that most touches my heart is the quest to find a sustainable system of producing fair and healthy food. I started a new journey as researcher at the Federal Rural University of Rio de Janeiro and have been in Ethiopia a few times, investigating a project to mitigate hunger in partnership with the Brazilian government. I have also spent precious time in rural areas of Mozambique. In the last years, I have been taking groups on learning journeys in countries such as India, Bhutan and Brazil. My goal is to create learning spaces where communities from Brazil, from Africa and from Asia can meet to exchange experiences, learn from each other and create new systems of life.